Posted at 22:18h in Writing by Anne Skyvington 0 Comments
0 Likes

While writing this post on Creative Writing,  I thought about a delicious path I’d discovered and followed in Cavtat, Croatia; it brought to mind the poem by the American poet, Robert Frost, which ends with the lines:

from The Road Not Taken

I shall be telling this with a sigh

Two roads diverged in a wood, and I—

I took the one less traveled by,

And that has made all the difference. 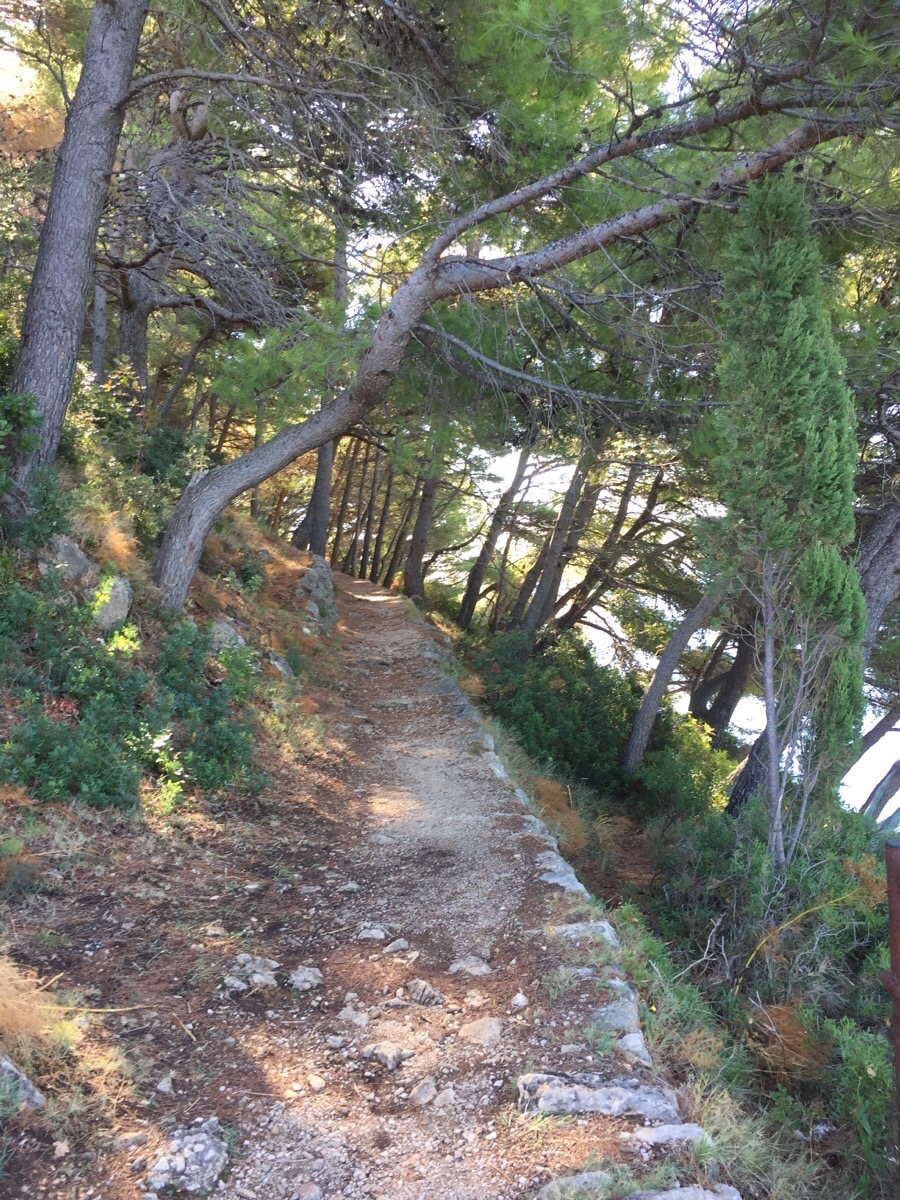 a path in Croatia

See the whole poem at The Poetry Foundation website

Reading and creative writing have always been the subjects that interested me most from early childhood onwards.  I lived in the country on a farm, but I was seldom alone because of my love for books. I still like nothing better than settling down with a good book that tells a story in fine prose;  and I have come to be passionate about my own attempts at writing, including short stories, memoir, novels and poetry.  I can still remember the stories and poems that stirred my imagination in primary school. At high school I loved Shakespeare and could not relate to those students in the class who abhorred his writings and taunted the English teacher.

During a career in teaching across most levels, I was often drawn to, and good at, teaching story writing. Whether it was when I taught at primary school level, or as a high school Special Education teacher, or later on as an Adult Migrant teacher, and Academic English tutor, I was called on  to act as a writing mentor on a one-to-one basis.  And in recent times I have further developed this skill with fellow writers in the Bondi and Waverley Writers’ Groups. These groups, one an affiliate of the NSW Fellowship of Australian Writers, the other part of the Friends of Waverley Library, met/meet monthly for workshop input from fellow writers, with suggestions given for improving works in progress.

I have been writing most of my adult life, starting off in the 60s and 70s while travelling around Europe and living in France. I wrote in a journal to record my travels, and later wrote for for therapeutic purposes, letting the thoughts and feelings pour out of me.

I started moving more and more towards fiction from the 80s onwards. During the 90s I studied creative and professional writing at the University of Technology, Sydney, where I learnt about the features of creative writing. This included Creative Non-fiction, a genre that has become increasingly important here,  and in the United States in recent times. In the nineties, I taught academic features (essay and report writing) to overseas students at the University of New South Wales.  This served to underscore for me the differences between the two genres. Creative Writing refers to prose or poetry that employs fictional devices, such as narrative structure, the use of scenes, imagery, emotional affect, metaphor, plot, and vital characterisation, voice, tone and language. Most think of fiction when they read or hear the word “creative”, however it can also refer to memoir writing, or factually correct writing that employs the devices usually associated with imagined works. Journalistic writing employs some of the features of creative writing, but the main focus there is on fact rather than on the imagination. One way of gaining an idea of what constitutes “creative” writing is to consider academic writing, which is a genre that falls far outside this category. In fact, if you consider a continuum with Creative Writing at one end, then Academic Writing could be placed at the opposite end of the line.

Tim Winton, one of Australia’s best novelists, once claimed that not having studied at university was a boon for his writing career. Not everyone is as lucky as Tim Winton; most of us need input from the professionals. I came to university studies as a mature age student, so I escaped some of the stultifying aspects of academia, at least in terms of fictional creativity.

I started teaching myself to blog in 2008 with Blogger. I gave myself the name “Sibyl”. This was probably a sign of the fact that I am basically shy, and the idea of being “out there” on the world wide web was at first quite shocking for me.  I wrote stories about my past, some linked to my early attempts at writing with a therapeutic goal in mind.  I also wrote about my family, my travels and other topics of interest, such as mental illness.  I had already been taking photos with a DSL camera by then, and I added some of these to my posts. Then in 2010, when I took over the Bondi Writers Group presidency, I started a new blog for the monthly newsletter. My personal blog had become more and more focused on Creative Writing and Publishing issues and I decided to import my writings to WordPress. This has led in recent times to this wordpress website, which I am now calling “The Craft of Writing”.

I have been writing short stories for many years, and have more recently started to think about offering them to journals or competitions. Having  had a couple of stories chosen for prizes and publication, I am now motivated to continue along this path. People usually think of fiction when they speak of short stories, however memoir pieces can also fit loosely into this category.  A short story is a structured narrative in the third or first person, more rarely in the second. The length is usually between 1500 and 3000 words, but it can be longer or shorter. The introductory paragraph/s usually set the scene, introduce the main character and engage the reader’s curiosity. A second part represents the rising action, while introducing conflict and suspense. Climax, revolving around a turning point, occurs in the third segment, which serves to prolong the reader’s expectation of a satisfying conclusion. The fourth part represents the falling action, which leads the narrative towards a resolution and the ending. A good way of explaining the conclusion of the story is that it  fulfils the promise set up in the introduction. Of course, this analysis is purely formal and can be challenged or overturned by a well written story. In my opinion, the ‘voice’ of the narrator is even more crucial in creating a successful story, as it carries the other elements such as structure along with it.  And voice escapes any attempt at a single analysis or conceptual unpacking,  as it refers simply to the way or manner in which a story is narrated.

A novel is a longer work ranging in length from 20 or 30 thousand words to 100 thousand or more. It does not have to be as rigorously structured as a short story in order to succeed, and can have many characters and multiple story line deviations as a result. However, a well structured novel is still a delight to read, and the successful reader is aware when reading a poorly structured novel. A novel that is too wordy will often not pull the reader along with it. The good novel is rich in content, but sparse and economical in words. Honesty and originality are important elements in good novel writing; an experienced reader will pick up immediately on false and unlikely scenarios. An example of a very well structured novel is Disgrace by J.M. Coetze, in which scenes balance one another thematically, or are set in contrast, just like in a well written play, e.g. Romeo and Juliet by William Shakespeare.

I studied this subject at the University Of Technology, Sydney in 2006. The current “guru” of this genre is the American academic and writer, Lee Gutkind. He edits a magazine called “Creative Nonfiction” that has a strong internet presence. He has published several books on the topic including The Art of Creative Nonfiction: Writing and Selling the Literature of Reality.  Of course there have been forerunners of this type of writing, such as Truman Capote with his In Cold Blood and Australian authors, for example Drusilla Modjeska’s pioneering story about her mother in Poppy.

My pathway was always going to take me along a creative trajectory, whether it be as an artist, writer, poet or actor.  Perhaps the choice to be a doctor or a scientist is more likely to lead one to a stable, less emotionally risky, goal. But the creative writing choice was what made me feel comfortable in my skin and, therefore, happier.