a true story by Roger Britton

I never believed in ghosts before, but now I am not quite sure … perhaps a “presence” is what I mean …

St Mary’s Convent and school, in Warren, central New South Wales, had been the home for Josephite nuns for over one hundred years. A shortage of vocations meant that they could no longer staff the school. I had accepted the position of the new lay Principal. This old, two-storey convent, with its iron lacework verandahs, was to be our home. With my wife, Angela and our four children, we moved in during the Christmas holidays of 1977.

A willing band of excited children carted bedding, toys and toiletry items up the stairs. Angela unpacked and set about organising the kitchen boxes and food, knowing that hunger would soon call us to table. 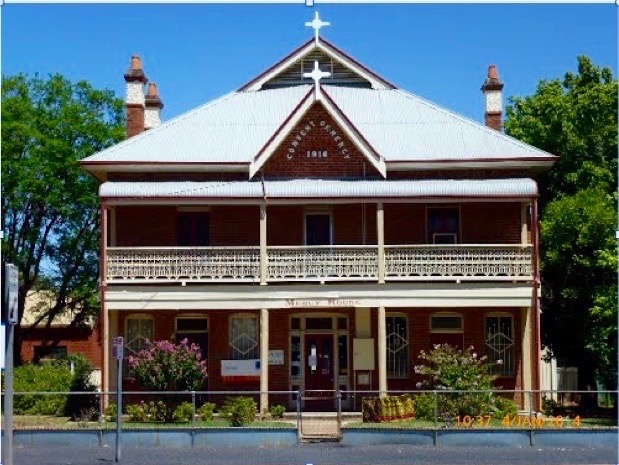 Upstairs, an east west corridor divided the convent into two distinct halves. Five small nuns’ cells were on the eastern side, while a study, two bathrooms and a dormitory were on the western side. Anne-Maree, Felicity, Rachel and Jeremy quickly reconnoitred the small cells and selected the one that they wanted. Each room had a single, black, iron bed and a thin, tall wardrobe. It was the only furniture that would fit into the room. French doors from the rooms opened onto a decorative, iron–laced, surrounding verandah. The children were ecstatic having their own rooms and not having to share with a sibling. They left the boarders’ dormitory for Angela and me. It was the only room big enough for our queen-sized bed.

Downstairs, an L-shaped corridor ran from the front door to the bottom of the stairs. A parlour, a refectory and kitchen surrounded the Nuns’ Chapel. It was complete with pews, statues and altar. Again, each room had French doors opening onto a verandah. The dark wainscots lining the hallways gave it a sombre appearance.

That night four exhausted children retired early and one by one, their nightlights turned off. Angela and I worked on without interruption. By eleven-thirty we were both tired, and had carried the last lot of clothing boxes upstairs.

“I’d just like to hang this painting before we go to bed,” said Angela” Could you put a nail in here, please love?”

Angela pointed to a spot opposite our bedroom door.

“My tool kit is downstairs,” I said. “Hang on a minute and I’ll get the hammer.”

At the bottom of the stairs, I put the nail between my lips and turned off the light. Holding the hammer, I wearily began to ascend the stairs. As I reached the first landing, I sensed someone coming down in the darkness. It couldn’t be Angela, as I could hear her humming to herself upstairs. Nor could it be a child, as they would have gone straight to Angela if they woke. I backed against the wall and tightened my grip on the hammer. If there was an intruder they would come off worse. I could see nothing, but I sensed someone, or something, coming down. “It” reached the landing where I stood. It paused, facing me. I poked the hammer where I thought the person should be. The hammer passed through thin air. The hair at the base of my neck began to curl. Then, whatever it was, turned and silently descended the rest of the stairs. I shot up the stairs two-at-a-time and switched on the light over the stairway. There was nothing.

I was not going back downstairs to check.

The nail went in and the painting went up. My mind was racing. Should I say something to Angela, or would that simply scare her and the children? I had no evidence of anything, but what had alarmed me? Perhaps it was my overtired imagination. The house was huge, dark and empty. Apart from us, that is.

Despite tiredness, I slept fitfully, listening to every creak and groan of the old house. By morning I resolved to speak to the Parish Priest who lived opposite in the presbytery. 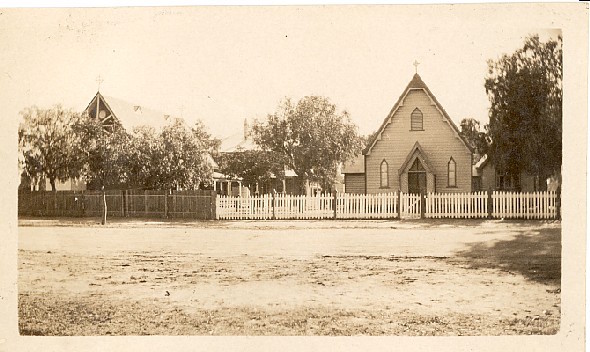 Historical Photo of the Catholic Church and School

Father Patrick Murray was cooking breakfast when I arrived. I drank a cup of coffee while he ate, and we talked generalities. Finally, I got a chance to broach the subject.

“Did anyone ever die in the convent, Father?”

“Oh, that they did. A long time ago, a nun was raped there one night, when she was returning from the outside clothesline. She later took her own life, she did. That was before my time, i’twas.”

“Might her spirit still be roaming the corridors of this place, Father?” I asked.

I breathed a sigh of relief. To know that it wasn’t a disturbed spirit.

“The last nun to die there,” he went on, “was Sister Columbia. She was a lovely old t’ing. A retired music teacher, but she stayed on to mind the girl boarders. The poor old t’ing had bad sciatica and couldn’t sleep at night. She’d wander around checking that the young lassies were safe in their beds. Then she’d go to chapel and spend the time praying. I’d sometimes see the chapel light on in the small wee hours. I’d know that she was there talking to Jesus, Joseph and Mary.”

Father Patrick had noticed my concern. I guessed that he knew what I knew.

I returned home, determined to say nothing to Angela and the kids. Although, I was feeling a bit better about being “in safe hands.”

A few nights later, Angela was ironing downstairs alone and, having finished, she switched off the light and began coming up. I noted that the stairway light was off so I came out of the office to turn it on for her. Before I could, I sensed the presence. In the gloom, I could see Angela hesitate on the landing, and like I had done, she backed up against the wall. Suddenly, she darted up the remaining flight.

“Are you all right, Love, what happened?”

And, the adamant way she said it, I knew it was pointless to discuss it further.

Both of us, I think, felt it, but never mentioned it. Perhaps it was because we didn’t want to frighten each other or the children. Still, a strange comforting, ephemeral feeling pervaded the house .

Months later it happened. The night was hot and we had left the verandah screen door open for the cool air to enter our bedroom. I had shut the other door into the hallway. I had been reading and didn’t want the bed light to disturb the kids. I then slept.

It was just before dawn when I heard the screen door open and close. I blinked my eyes wide, but I was too tired to lift my head. I suspected it was wind. Then, oddly, I felt as if my mother had entered the room and was standing at the foot of our bed. I had that peculiarly secure feeling. I was about to close my eyes and go back to sleep when the door I was facing slowly opened, paused, then gently closed. Ah, the wind again, I thought. However, I was aware that the door handle was slowly and silently turning … my skin prickled.

a ghost or a presence?, a true story about a ghost, do you believe in ghosts?, where is Warren in NSW?, who are the josephites