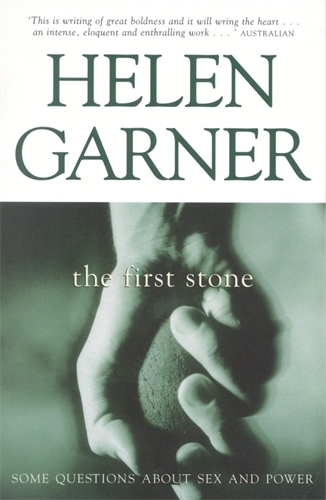 When I studied The First Stone by Helen Garner at the University of Technology, Sydney as part of a Master’s degree in Professional Writing, I noticed that there were two camps: those who loved her book, and those who saw her as a traitor to the feminist cause. It made me ask myself whether I, too, was such a traitor. I was in the former camp, but many of the (younger) women belonged to the other side, along with (I think) the male teacher at the time.

Admittedly, this was one of her more polemical works, in that it dealt with her support of a master at a Melbourne university college, who in 1995 was accused of sexual misconduct towards two female residents.

The main reason for her support, I gathered, was her compassion for the master and his family, over what she saw as a minor incident that could have been handled differently. Instead, he and his family had to suffer the ignominy of his sacking and public disgrace.

It showed up a dichotomy between older and younger  feminists

More recently, I have been part of a book club whose members chose to study Garner’s first novel, Monkey Grip, set in the seventies in Melbourne. Again there was a polarising effect: we either loved or hated this fictional work based on Helen’s diaries from the time. The book revolves around the lives of members of a communal household and their friends, focusing for the main part on Nora and Javo who are in a co-dependent relationship, he addicted to heroin, she simply love-addicted. They are typical of the hedonistic, often anarchistic, youth that congregated around certain places, such as university campuses, in the 60s and 70s, intent on experimenting with life-styles, drugs and sexual freedom. The strength of the novel is its recording of a social movement at a moment in time that in itself polarised society and widened the generation gap for years to come. Tempers flared during the discussions, one side having only positive things to say about the book, the other side seeing only its flaws. “So honest and brave!” said one side, “A truthful historical account of the 60s and 70s as a poetic/creative era of experimentation, symbolised by the poetry throughout.” “It needs a good editor!” said the other side.

By coincidence, another friend who belongs to a book group on the Central Coast also read Garner around the same time as my group. To quote her words exactly, she thinks of Helen Garner more as a friend than as a name on a book cover. “Helen got so used to me lining up for her to sign her latest work that she wrote in one: ‘To Denise, in queue after queue’. Another memorable time I happened to see her in David Jones. Holding a brand new copy of her My Hard Heart and a lot of chutzpa, I approached her to sign it. She wrote on the flypage: ‘To Denise, just before Christmas in the DJ’s knicker department! Warm regards.” (See dinadavis2015.wordpress.com)

Denise goes on to say: “The main reason I think of Helen Garner as a friend is the same one held by many of her readers, especially women. It’s her personal, intimate writing style, which invites the reader into her life and into her heart. She holds nothing back, even if it’s controversial, as it was with The First Stone. She is able to say so much with so few words. Her style is always spare, even chiselled, yet never dry. Re-reading her collection The Feel of Steel I was struck again by the economy of her prose which expresses such fiercely honest emotions. How does she do it? Just as an artist achieves a likeness with a few strokes, so she paints vivid word pictures of feelings, events, sights and smells. Strangely enough, only I and one other member of our book group liked Helen Garner and her work; all the other members disliked her intensely for the very same reasons that I love her. People complained that she was too personal, even invasive with her tell-all style. One woman announced that she didn’t need people like Helen in her life because she sounds too angry. We were discussing The Spare Room, her latest novel in which anger does play a part, but to my mind only to fuel the exposure of suspect alternative medical practices and their exploitation of vulnerable people like the woman in the story. We try to be democratic in our book club, but I began to feel like a voice in the wilderness.”